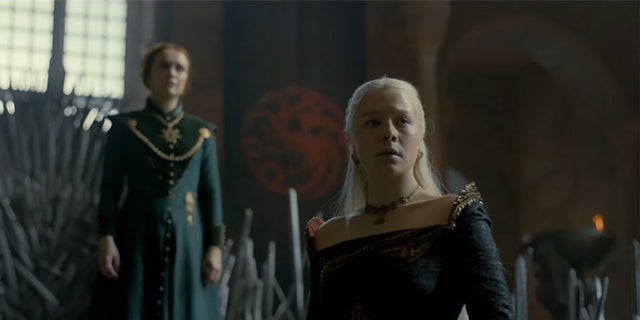 HBO Max has already renewed “House of the Dragon” for Season 2.

“We are proud of what the entire ‘House of the Dragon’ team accomplished in the first season,” Francesca Orsi, executive VP, HBO Programming, said in a statement to The Hollywood Reporter. “Our phenomenal cast and crew took on a huge challenge and exceeded all expectations, delivering a show that has established itself as must-see TV.”

“Thank you very much [to co-creator and executive producer George R.R. Martin and co-creator and showrunners Ryan Condal and Miguel Sapochnik] For leading us on this journey,” Orsi added before announcing that there would be a second season.

(HBO has renewed “House of the Dragon” for a second season.)

“We couldn’t be more excited to continue bringing the epic saga of House Targaryen to life with Season 2.”

The “Game of Thrones” prequel premiered Sunday on HBO Max. “House of the Dragon” takes place approximately 200 years before the events of the original series.

“House of the Dragon” premiere crashed the HBO Max app for some users.
(HBO)

However, it was not smooth sailing. Premiere crashed the HBO Max app for some users.

Many responded to HBO Max’s tweet announcing the show’s release and complaining that they couldn’t watch it.

“Your app keeps closing before the episode plays,” one user wrote.

“The app crashes every time I try to play an episode! What’s going on?!?!? Server overload?” Another one added.

“Would be even better if the app didn’t crash when trying to view it. Everything else on the app works fine but ‘House of the Dragon’,” said one user. “Looking at the Amazon Fire Stick and already reset it multiple times.”

Although some users have problems, HBO Max Pointed to Amazon devices for the crash.

“‘House of the Dragon’ is being watched successfully by millions of HBO Max subscribers tonight,” HBO said in a statement via The Hollywood Reporter. “We are aware of a small portion of users trying to connect through Fire TV devices that are experiencing issues and are in the process of rolling out a fix for those affected users.”

“House of the Dragon” will tell the story of Daenerys Targaryen’s ancestors, the Targaryen family, when they ruled Westeros.
(AP via HBO)

The prequel series was first announced in October 2019, the same day HBO Max announced the cancellation of another prequel they were planning, which was expected to delve deeper into the story of The Long Night, which is referenced in “Game of Thrones”. .”

“House of the Dragon” is based on “Fire and Blood,” a book written by George RR Martin, author of “A Song of Ice and Fire.” “Game of Thrones” was based on