Nielsen Streaming Top 10: ‘House of the Dragon’ and ‘The Rings of Power’ Face Off for First Time 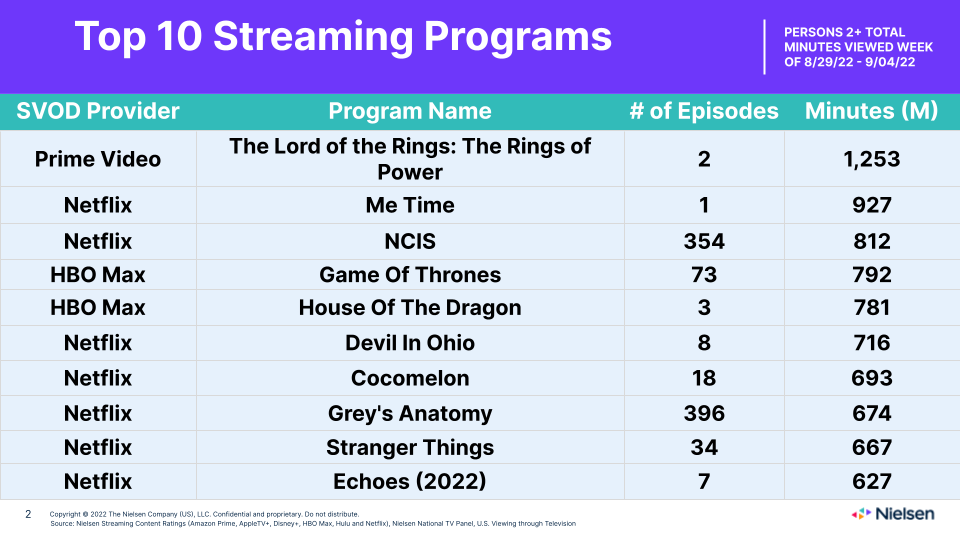 Two of the hottest genre projects on TV rights are now battling it out for first-timers.

HBO’s “Game of Thrones” prequel series “House of the Dragon” and Amazon Prime Video’s “The Lord of the Rings” expansion “The Rings of Power” both appeared in Nielsen’s streaming rankings for the week of Aug. 29-Sept. 4, coming in at “The Rings of Power” — No. 1 with 1.3 billion minutes watched. “House of the Dragon” was right behind it, at No. 5, with 781 million minutes watched, 61% less than its rival. (Note: Nielsen only measures US viewing on television screens, excluding other countries and devices.)

This isn’t an apples-to-apples comparison, as the availability of the two series doesn’t exactly match. “The Rings of Power” debuted with two episodes on September 1 at 9 pm ET, meaning it was streamable for the past three days as well as a few hours of Nielsen’s viewing window. In contrast, “House of the Dragon” aired its first episode on August 21 at 9 pm ET, the second on August 28 and the third on September 4 – just hours before Nielsen finished his countdown to Episode 3. the week Additionally, it’s important to note that “The Rings of Power” is a streaming exclusive, while “House of the Dragon” has cable viewership that is not included in Nielsen’s streaming charts.

By the way, Aug. 29-Sept. 4 viewing windows mainly match the first two episodes of both series, and both series have roughly hour-long episodes, but the streaming exclusivity for “The Rings of Power” is a nice perk. “House of the Dragon” has a large contingent of viewers who watch the show on cable; For example, 3.2 million of the 9.9 million viewers on the premiere night of “House of the Dragon,” per Nielsen, were on HBO. That’s roughly one-third of viewers.

But still, “House of the Dragon” had the advantage of having its first two episodes available for viewing throughout the week. Furthermore, the short window of availability for Part 3 should not be overlooked. For example, when episode 1 of the series premiered at the tail end of Nielsen’s August 15-21 window, it didn’t chart, but still saw 327 million streaming minutes in the first few hours on HBO Max.

Charting higher this week than “House of the Dragon” was its predecessor. “Game of Thrones” ranked No. 3 with 792 million minutes of streaming viewing for the second week in a row thanks to fans rewatching the series. So, with the prequel’s 781 million viewing minutes, as a franchise, “Game of Thrones” has “The Lord of the Rings” beat — of course, the latter doesn’t have the advantage of longer runs than its predecessor.

This week’s Nielsen Streaming Top 10 is the first third-party viewership data about “The Rings of Power” to be released. Previously, the only information available about Amazon’s audience was that the series reached 25 million global viewers on its first day, so this is a huge win for the streamer, which has never debuted a series at number one before. on its opening weekend (although one film had a chart-topping debut: “Coming 2 America”). The billion-dollar budget Amazon invested in “The Rings of Power” — making it the most expensive TV project ever — certainly paid off.

The Netflix movie “Me Time” held the No. 2 chart position for the second week in a row with 927 million minutes in its first full week as a Netflix movie, down slightly from last week’s 971 million minutes. No. At No. 3 was “NCIS,” making it the top 10 for the most weeks in Netflix’s continuous viewing, but it peaked in this viewing window likely because viewers rewatched the series ahead of its Sept. 19 season 20 premiere on CBS.

“Stranger Things” dropped from No. 4 to No. 9 in its ninth week of full availability for Season 4, with 667 million minutes watched compared to last week’s 890 million. And in last place was Netflix’s “Echoes,” as it was last week’s No. 1 streaming program. From August 29 to September 4, its second full week of availability, the limited series was watched 627 minutes, up from 1.1 billion minutes the previous week.