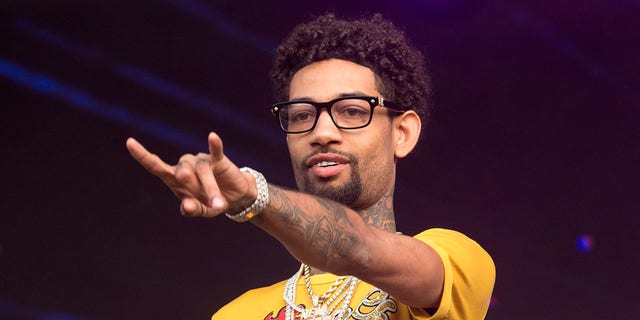 A 40-year-old man and his teenage son were arrested and charged this week in connection with the murder of rapper PNB Rock in Los Angeles earlier this month.

Freddie Lee Tron was taken into custody by an FBI-led fugitive task force in Las Vegas on Thursday, and his 17-year-old son was arrested on Tuesday and remains in jail.

Police on Wednesday identified Trone as a suspect and warned the public that he should be considered armed and dangerous. He remains in Las Vegas pending extradition to Los Angeles.

Both are charged with one count of murder, two counts of second-degree robbery and one count of conspiracy to commit robbery.

PnB Rock was dining with his girlfriend at Roscoe’s House of Chicken ‘N Waffles in South LA on September 13 when a suspect approached and robbed them at gunpoint.

The rapper, whose legal name is Rakim Allen, was shot multiple times in the back and chest during the robbery, and the suspect fled in a getaway car, police said.

The rapper’s girlfriend, Stephanie Sibounhuang, is also the mother of his two children.

According to Fox 11 in Los Angeles, court documents identify the alleged shooter as 17 and Troon as the driver.

The teenager was out on parole or probation at the time of the shooting. He also wore an ankle monitor that was not being tracked, authorities confirmed to Fox 11.

Shawntell Trone, Trone’s wife and the teen’s stepmother, was charged as an accessory after the fact. She was arraigned Thursday and pleaded not guilty.

On Thursday, rapper Cardi B defended Sibounhuang, after she was attacked by online trolls who accused her of contributing to her boyfriend’s death after she posted an Instagram photo of her food and tagged the location before the shooting. By the time she uploaded the post, the suspect was already in the parking lot, the Los Angeles Times reported.

“Told you,” Cardi B tweeted. “Yal mustn’t know how the hood moves. We all should apologize to that girl—all of you comfort her knowing she saw her baby daddy die on her face…. SOCIAL MEDIA INVESTIGATORS YAL CHOK!!! !”

Rock was best known for his 2016 hit “Selfish” and guest appearances on songs by other artists such as YFN Lucy’s “Everyday We Lit” and Ed Sheeran’s “Cross Me” with Chance the Rapper. His latest track, “Love Me Again,” was released on September 2.

The Associated Press contributed to this report.