China certified the C919 jet to compete with Airbus and Boeing 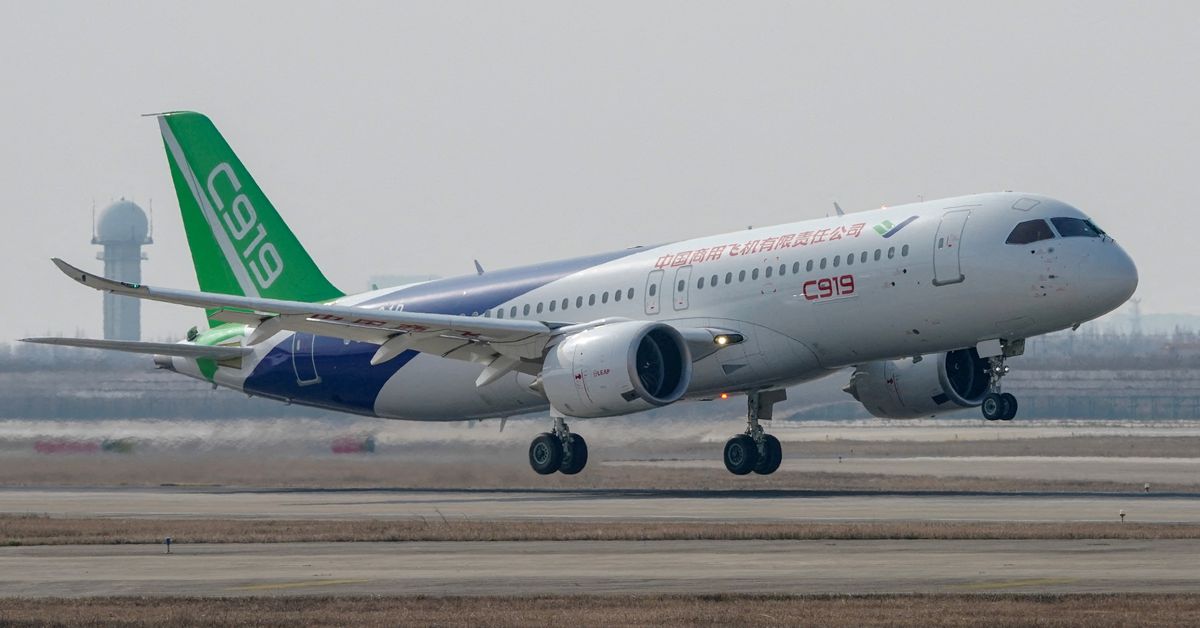 The aircraft, produced by state-owned manufacturer Commercial Aircraft Corp of China (COMAC), were expected to be certified by the end of the month after two aircraft flew to Beijing on September 13. A sign in one of the photos reads “C919 Aircraft Type Certificate Delivery Ceremony” in Chinese.

COMAC did not immediately respond to a request for comment.

The C919, launched 14 years ago and designed to carry 168 passengers, will compete with the popular Airbus A320neo and Boeing 737 MAX families in the world’s second-largest aviation market as China looks to boost its technological independence amid trade tensions.

Although the aircraft is assembled in China, it relies heavily on Western components, including engines and avionics from companies GE ( GE.N ), Safran ( SAF.PA ) and Honeywell International ( HON.O ).

Strict US export licensing rules have delayed parts sourcing and are the main risk to ramping up production unless China replaces foreign engines and components with local technology.

Richard Aboulafia, US-based managing director of Aerodynamic Advisory, said the plane appeared to be a relic of an old era of growing integration between China and the West.

“Thus, we have an aircraft that is only superficially Chinese but is actually powered by Western technology and systems,” he said. “It will take a decade and several billion dollars to convert it into a genuine Chinese aircraft.”

The certificate approved on Thursday means it can be delivered to the first customer, China Eastern Airlines Corp Ltd ( 600115.SS ), although local media have reported that the plane is unlikely to enter commercial service with passengers until next year.

The C919 has never made an appearance at Airshow China, the country’s premier aviation event, and it is unclear whether it will be on display or flown at the show in November.

COMAC will also need separate production certification before ramping up mass production of the plane, meaning its influence on the global aircraft market could be limited as Airbus and Boeing produce dozens of narrowbodies a month.

“The C919 will gradually begin to replace single-aisle aircraft made by Boeing and Airbus,” in China, Huaxi Securities said in a research note this month. “Over the next 20 years, China’s demand for narrow passenger aircraft such as the C919 will average 300 per year.”

The C919’s regional jet predecessor, the ARJ21, faced a 2.5-year gap in receiving type certification and production certification, which slowed production. This contrasts with the West, where both certifications are generally awarded at the same time.

Like the ARJ21, the C919 lacks certification validation by US and European regulators, limiting flights to domestic markets and possibly countries with close ties to China.

The European Union Aviation Safety Agency (EASA) has been working with COMAC on the certification validation process on the C919 for several years in parallel with CAAC’s work, an EASA spokesperson said.

“We cannot comment on the date when this certification will be completed,” the spokesperson said.

The US Federal Aviation Administration did not respond to a request for comment on the potential C919 certification validation.

According to COMAC’s website, there have been 815 orders for the C919 from 28 customers. But China Eastern is the only customer that has announced a firm delivery schedule and expects to receive just four next year.

Meanwhile, the Boeing 737 MAX is yet to return to commercial service in China, having been grounded since March 2019 following two fatal crashes.

However, three months ago major Chinese airlines placed orders for around 300 Airbus A320neo family planes, indicating the country plans to continue importing for some time.

Aboulafia said that if China decides to stop importing Western aircraft, the United States and its allies could ban component exports and destroy the C919 for years.

“Try building an airplane without engines or avionics,” he said. “It would just be a metal shell.”

Reporting by Sophie Yu in Beijing and Stella Qiu and Jamie Freed in Sydney Additional reporting by David Shepardson in Washington Editing by David Goodman, Gerry Doyle and Frances Carey