Crossing their broken road bridge, the Ukrainians return to the liberated village 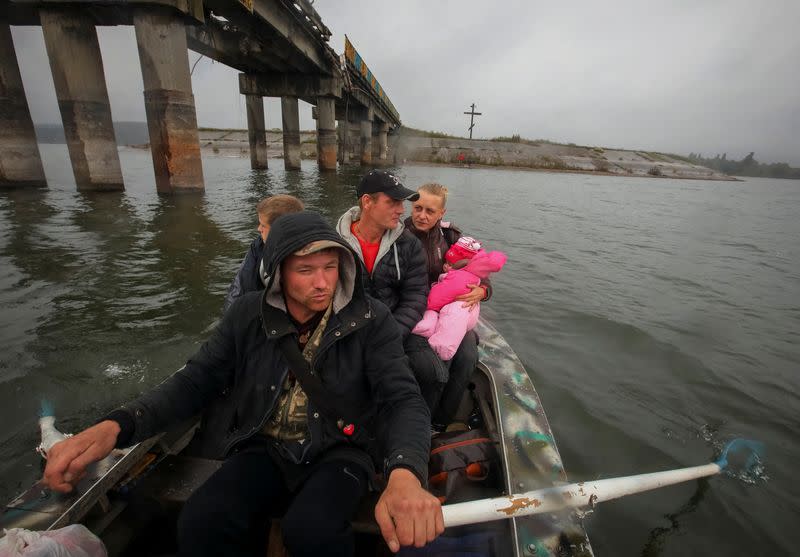 STARYI SALTIV, Ukraine (Reuters) – Ukrainian volunteer Vitaly Kivirenko loads a small rowing boat with tins of food and supplies on Pechenizske Reservoir, northeast of Kharkiv, near the village of Stary Saltiv, ready for a short trip that was simply unimaginable. A few weeks ago.

After Ukrainian forces pushed back Russian forces from the eastern shore of the reservoir, opposite Stary Saltiv, in a counter-offensive earlier this month, volunteers and relatives can finally reach isolated villages on the other side, and some of those who fled are returning. home page.

After the Ukrainian army blew up Stari Saltiv’s road bridge in two to stop the advance of the Russian army within days of the Russian invasion, rowing is the easiest option to cross the water and deliver flour, sugar, oil and fuel for generators.

The bridge once connected the city of Vovchansk, a few kilometers from the Russian border.

To reach the other side by road requires a long detour through a dam further south at Pechenihai, around a reservoir created on the Siversky Donets River, and takes about six hours.

Kivirenko and other volunteers line up near the massive remains of the bridge, its railings painted the blue and yellow of the Ukrainian flag, in the driving rain.

“The shelling here was very heavy; you couldn’t even get close. The shelling was continuous, about 80% of the houses were destroyed,” Kivirenko said, referring to the situation in Stari Saltiv.

Despite the destruction of the bridge, Russian forces still took Stari Saltiv and held it until May, when it was retaken by Ukrainian forces. The area remained under constant artillery fire from the Russians in the east until the retreat in September.

“We are happy to go home. Finally, it happened,” said Serhii Negroviei, returning by boat to his home in the east with his wife, son and young daughter.

“My child was born in February. She was born on February 11. And then [the Russian invasion] started This is how we survived the firing.”

His wife Olena described the situation in her village.

“It was difficult. The neighbor’s house was shot at, then the house next door. There were explosions in the neighbor’s yard,” she said.

Thousands of people have been killed and Ukrainian cities left in ruins since Russia invaded Ukraine on February 24 in what it called a “special military operation”. Moscow has denied targeting civilians.