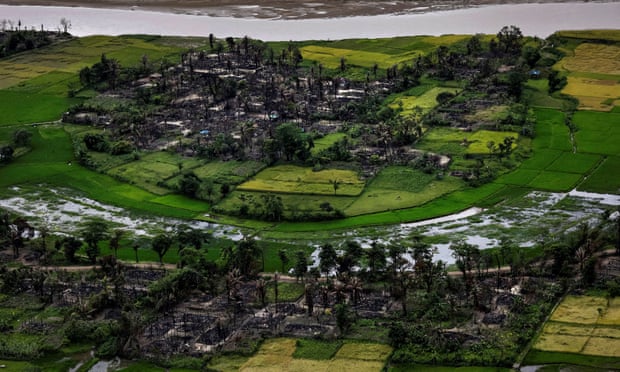 F5 years ago, Muhammad*, his wife and two children sought refuge in their home, alarmed by reports of violence in a nearby village. Myanmar’s military launched a so-called “clearance operation” in northern Rakhine state, forcing large numbers of Rohingya to flee to neighboring Bangladesh.

“If you remember those times, to be honest, it’s hard to eat or sleep,” he says. August 25 was a black day for the Rohingyas.

Rohingyas who fled across the border gave harrowing testimonies of gang-rapes, killings and burning of homes. The events shocked the world and led to accusations of genocide at the UN’s highest court, which the UK announced on Thursday it would support.

About 700,000 Rohingya have fled to Bangladesh, where they live in squalid and overcrowded camps. But an estimated 600,000 Rohingya remain in Myanmar, who Human Rights Watch describes as crimes against humanity of apartheid, persecution and deprivation of freedom.

‘I can’t express my sadness’

Muhammad’s village survived. Along with neighbors, his family decided it was safest to stay for two months, stocking up on vegetables and supplies as long as possible. “It was like a prison, we couldn’t go out of the village, we couldn’t get food,” he says.

When they were finally able to leave their village, their territory had been irrevocably changed.

Today, communities face severe restrictions on their movement, including confinement in camps and being prevented from earning a living or accessing basic services such as education and health care. According to Human Rights Watch, the military has arrested an estimated 2,000 Rohingya, including hundreds of children, for “unauthorized travel” since the coup.

“We are men in name, but we live like animals,” says Muhammad. “Even animals are happy … I cannot express sadness.”

Even getting medical treatment in hospitals is almost impossible due to the travel permits required and the huge costs and discrimination they entail.

Zhou Win, a human rights specialist at Fortify Rights, said Rohingyas are also under pressure to obtain National Verification Cards (NVCs) that would identify them as “foreign Bengalis” rather than rightful citizens of Myanmar. He added that the military does not actively campaign for people to get the cards, but in practice they are required for essential tasks such as opening a bank account or working with an international NGO. “People will inevitably have to accept NVC, even if they don’t want to,” he said.

In Rakhine State, the Rohingya are caught between two rival factions, the army and the Arakan Army, a pro-Rakhine ethnic armed group. The latter fought against the military in 2019 and 2020 and now control large parts of Rakhine State.

Many Rohingya, including Muhammad, say they both have to pay taxes.

The Arakan Army, which was previously hostile to the Rohingya, has changed its stance, referring to the Rohingya as “Muslims” instead of “Bengalis”, which is considered offensive to the Rohingya as it implies that they are foreigners. The group has now relaxed strict military restrictions on movement in areas it controls.

More broadly in Myanmar, the military’s relentless violence against communities is showing signs of shifting public opinion, with some regretting not showing more solidarity towards the Rohingya in 2017. Still, skepticism persists among Rohingya communities.

“They are speaking with their mouths, not with their hearts,” says Kadar*, who lives near Mangdaw in northern Rakhine State and is one of the few people left in his village after 2017.

While the Arakan Army and the army agreed to an informal ceasefire in November 2020, fighting has resumed in recent months, residents say. Even for those who live away from the conflict, it means road closures and rising food prices.

Among the 120,000 people living in Rohingya camps in Rakhine state, established after sectarian violence in 2012, Romida* said prices of basic goods have risen. Three years ago, she was pulled out of school so her two teenage sons could work. “I had no choice,” she says. She worries about her children who have gone to work outside the camp; Others were attacked and robbed by Rakhine youths, she added.

Romida said the price of a 50kg bag of rice has already doubled to 50,000 kyat. Others told the Guardian that price rises elsewhere were even more extreme and that they did not know how communities would cope if the increases continued.

That day, Romida said she had eaten only in the morning. “I can manage some vegetables or snacks, some spinach. But there are many families who cannot arrange spinach, chillies or anything. Children have been lying at home since morning, many families have not been able to feed their children,” she added. The shelters in which the families live are flimsy and cramped; During the monsoons, their tin roofs leak, there is heavy rain, while the heat is unbearable during the hot months.

According to Human Rights Watch, the military has blocked aid sent to Rohingya camps and villages since the uprising, fueling frustration.

The difference between her life now and when her family lived freely is “like heaven and earth”, she says.

* Names have been changed to protect their identities