French wine country has the earliest harvest due to drought 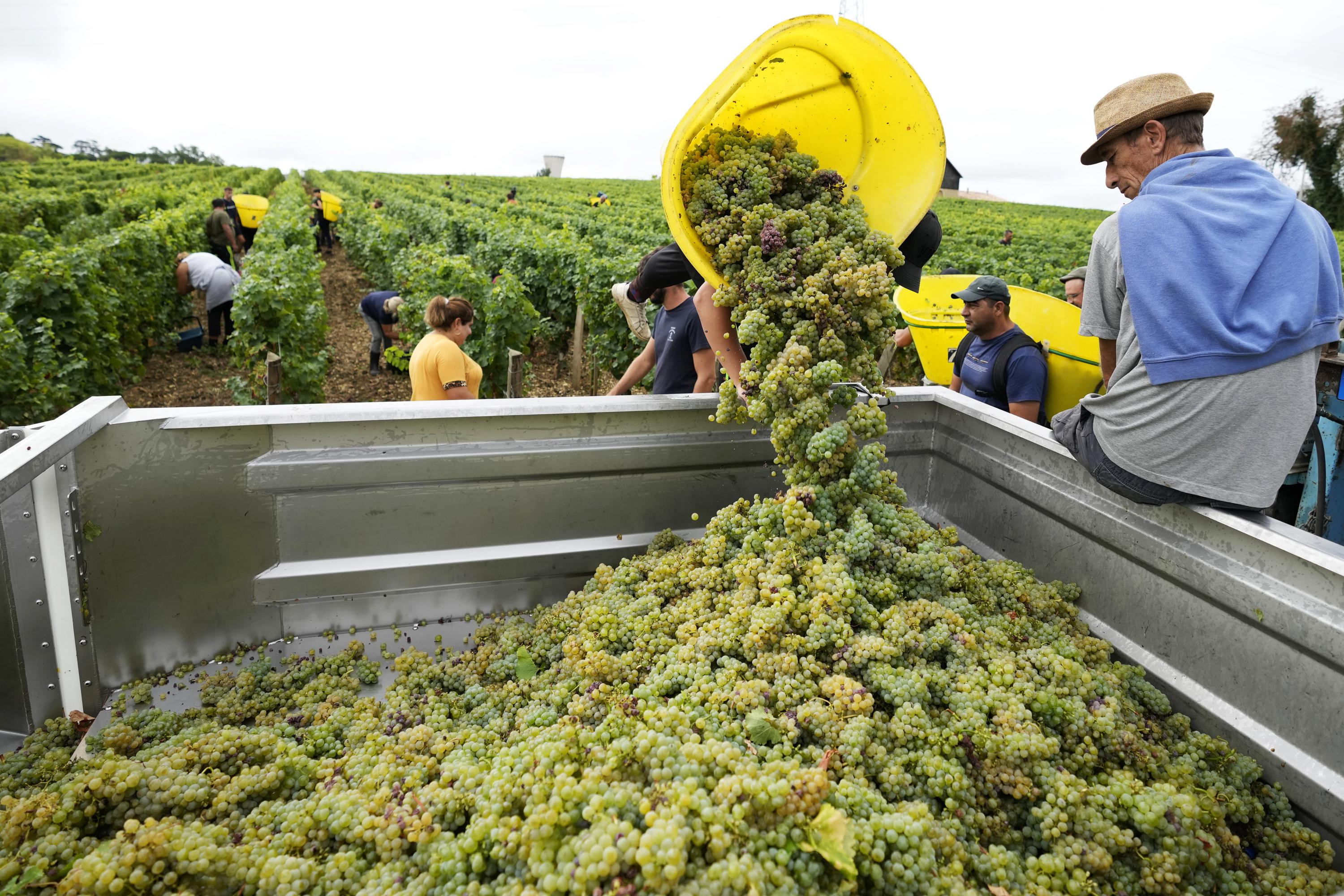 BORDEAUX, France (AP) — The landscape in Bordeaux’s iconic vineyards looks much as it always has, with healthy, ripe grapes hanging from rows of green vines.

But this year there is something different in one of France’s most famous wine regions and the rest of Europe. Harvests that once began in mid-September are now happening earlier — in mid-August — as the wine industry adapts to the unpredictable effects of severe drought and climate change.

Paradoxically, heat waves and wildfire seasons produced excellent grapes despite low yields. But achieving such harvests requires creative changes in growing techniques, including pruning the vines differently and sometimes watering them in areas where irrigation is prohibited. And growers across Europe who have seen the effects of global warming first-hand are worried about what’s to come.

So far, “global warming is very positive. We have good maturity, good balance. … But if you turn to the future, and if you raise the temperature one more degree, you lose part of the freshness of the balance of the wine,” said Fabian Tetgen, technical director of Château Smith-Haut, an estate growing organic wine grapes in Martilac, Lafitte, south of Bordeaux. .

Grape growers adjusted their practices as a series of heat waves, along with a lack of rain, hit much of Europe.. In the Bordeaux region of southwestern France, a huge wildfire destroyed large areas of pine forests. From the end of June to the middle of August there was no rain.

As the harvest begins, dozens of workers kneel in the vineyard to pick the grapes by hand and place them in baskets. The fruit is immediately crushed to produce juice, which is poured into tanks, then barrels to begin the wine production process.

Eric Perrin, one of the owners of the Château Carboneux estate, remembers in his childhood, in the 1970s, the harvest starting in mid-September. This year, it started on August 16.

But the 2022 vintage could be better than ever, Perrin said, because the grapes are healthy and balanced. Warm, dry weather protects vines from diseases such as fungus.

Winemaking is a centuries-old tradition at Château Carbonnieux, where Thomas Jefferson visited the vineyards before becoming President of the United States in 1787 and planted a pecan tree that still stands in a park today.

In the past, vintners would shape the grapes to allow the grapes to receive maximum sunlight so they produced more sugar, which turns into alcohol. This year, growers tended to the leaves to protect the grapes so that the shadows would preserve the fruit’s acidity and freshness, Teitgen explained.

Yields may be 15% to 20% lower in the wider region, mostly due to smaller grapes and sun scorch in certain areas, Teitgen said, but that won’t affect the quality of the wine.

In front of the 14th-century tower of the Château Smith-Haut-Lafitte vineyard, Manon Lecouffe carefully watered the newly planted vines this week, an inevitable task.

Many-year-old vines have deep roots that allow them to draw water from underground and withstand drought without much trouble.

But this year, estates had the right to water mature vines, a practice usually banned in Bordeaux.

“Some plots were suffering from leaf fall,” Lekoff said.

Another step vintners can take is to reduce the density of their plots to use less water or work to better conserve soil moisture.

At Château Olivier, which also makes Pessac-Leognan wines, director Laurent Lebrun showed how he and his team go through the vineyards to taste the grapes plot by plot to decide where and when to harvest.

The effects of global warming are now part of everyday life for vintners, LeBrun said, noting the pace of change.

“We need to reprogram our own thinking,” he said. “There are many tools that are still within our reach, that are already used in the tropics.”

Further south in Europe, harvesting began weeks earlier than normal to save dried and scorched grapes. Production is expected to drop by 10% to 20% in some regions of Italy, Spain and Portugal, although producers are hoping for an increase in quality.

Italy’s Coldiretti agricultural lobby stressed that higher costs of energy and raw materials are expected to increase costs by 35%.

As warm winters make grape vines bud early, French vintners worry that frost will interrupt the growing season more often. A violent hailstorm can destroy a year’s worth of work in minutes.

At Château Carbonnieux, Perrin fears that some small producers may not be able to cope with the changes.

“The weather events since 2017 have reduced the harvest. Not everyone will be able to survive it, that’s for sure,” he said.

Follow all AP stories on climate change at https://apnews.com/hub/climate-and-environment.