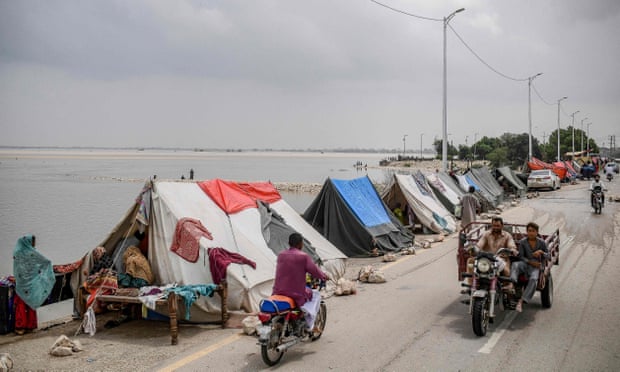 Heavy rains have lashed large parts of Pakistan as the government declared a state of emergency to deal with monsoon floods that have affected more than 30 million people.

The annual monsoon crops are needed for irrigation and to fill lakes and dams across the Indian subcontinent, but each year also brings a wave of destruction.

The National Disaster Management Authority (NDMA) said on Friday that more than 900 people have died this year – including 34 in the past 24 hours – as a result of monsoon rains that began in June.

Officials say this year’s floods are worse than 2010 – the worst on record – when more than 2,000 people died and a fifth of the country was under water.

“I have never seen such a big flood from rain in my life,” Rahim Bakhsh Brohi, an elderly farmer near Sukkur in southern Sindh province, told Agence France-Presse.

Like thousands of others in rural Pakistan, Brohi sought shelter next to the national highway, as the high roads are one of the few drier places.

A statement from the office of the prime minister, Shehbaz Sharif, on Friday said 33 million people had been “severely affected” by the floods, while the country’s disaster agency said nearly 220,000 homes had been destroyed and half a million more damaged.

Nasrullah Mehr told AFP, “The cotton crop planted on my 50 acres of land is gone. “It is a great loss to me … what can be done?”

Climate Change Minister Sherry Rahman, who on Wednesday called the floods a “disaster of epic scale”, has declared a government emergency and appealed for international help.

Pakistan ranks eighth in the Long-Term Global Climate Risk Index, a list compiled by environmental NGO Germanwatch that is considered most vulnerable to extreme weather.

Earlier this year, much of Pakistan was in the grip of a drought and heat wave, with temperatures reaching 51C (124F) in Jacobabad, Sindh province.

In Sukkur, about 50 miles (75 km) away, residents struggled to make their way through mud roads littered with debris from the floods.

“If you had come earlier, the water would have been so high,” 24-year-old student Aqeel Ahmed told AFP, raising his hands to his chest.

Sharif canceled a planned visit to the UK to monitor the flood response and ordered the military to throw all resources into relief efforts.

“I have seen from the air and the devastation is indescribable,” he said on state TV after visiting Sukkur.

“Cities, villages and crops are submerged. I don’t think this level of destruction has happened before.”

A national fundraising appeal has been launched, with the Pakistan Army saying that each commissioned officer will donate one month’s salary to the cause.

Almost all of Pakistan has been affected this year, but Balochistan and Sindh in the south and west have suffered the most.

Both provinces have experienced the most devastating monsoons in six decades, with 522% and 469% more rainfall than this year’s average, respectively.

Heavy rains have washed away people, roads, bridges and livestock. Balochistan’s rail links with the rest of Pakistan have been suspended since a major bridge built by the British government in 1885 collapsed in March about 35 miles (56km) from the provincial capital, Quetta.

Quetta was lashed by heavy rains for more than 24 hours that ended at 2 pm local time on Friday. Saw the provincial capital Worst flood in last 24 hours And water seeped into people’s houses, causing loss of life and great loss of life and property.

“As Quetta city is a valley, the flood water has come from the nearby mountains and the city has experienced unprecedented rainfall. brought urban flooding. We are trying hard to save people.

“We are witnessing the worst floods in Balochistan and many parts of the province have become inaccessible as roads and bridges have been destroyed.”

On Friday, pictures of buildings and bridges being destroyed in the northern hilly areas by swollen rivers were circulating on social media.

In the western border town of Chaman, which borders Afghanistan, commuters were forced to wade through waist-deep water after a nearby dam burst, adding to flooding caused by rain.

Pakistan Railways said that near Quetta, the capital of Balochistan province, train services were disrupted due to damage to an important bridge due to flash floods.

Most mobile networks and internet services were down in the province, with the country’s telecommunications authority calling it “unprecedented”.