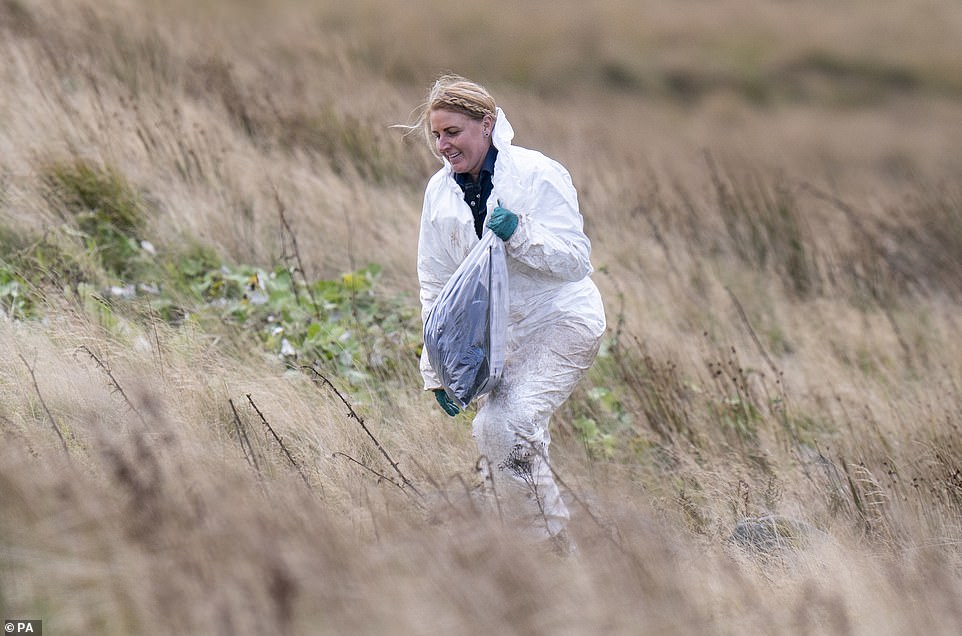 The police search for the last victim of Moors murderers Ian Brady and Myra Hindley this morning entered its third day – as victim Keith Bennett’s family were frustrated waiting for news, saying they did not believe he was there.

On Friday author Russell Edwards said he believed he has located the youngster’s makeshift grave following ‘extensive soil analysis’ which indicated the presence of human remains.

He thinks Nazi-obsessed Brady wanted to create the shape of a swastika with the spots on Saddleworth Moor where he buried his victims.

But Keith’s brother Alan expressed exasperation today about the search – although accepted things could not be ruled out.

He wrote online: ‘I am just getting frustrated, annoyed, confused and feeling a lot more emotions because there is more to this than meets the eye and I cannot understand why that bloke appears not to have been exact in his information to the police about the location.

‘Surely, he cannot have forgotten exactly where it is after his claims about his years of investigations. Just a few of the hundreds of thoughts running through my mind.

‘Just to be clear about this. I’m not saying there is nothing there, what I will say is that I, and many others are confused, to say the very least.

‘However, nobody can rule anything else out. I just cannot understand why nothing has been found.’

There’s a lot more I would like to say and ask but out of respect and gratitude for the Cold Case Team and the Forensic Team I’ll keep quiet for now.’

So far it had been reported human remains had been located but Greater Manchester Police said its investigation had found none.

Supplied new photographs and information are considered so compelling forensic officers will continue their work until all avenues are exhausted, which could take days longer due to ‘difficult’ conditions.

An officer carries an evidence bag on Saddleworth Moor, in north west England, where Greater Manchester Police are searching for the remains of the body of 12-year-old Keith Bennett 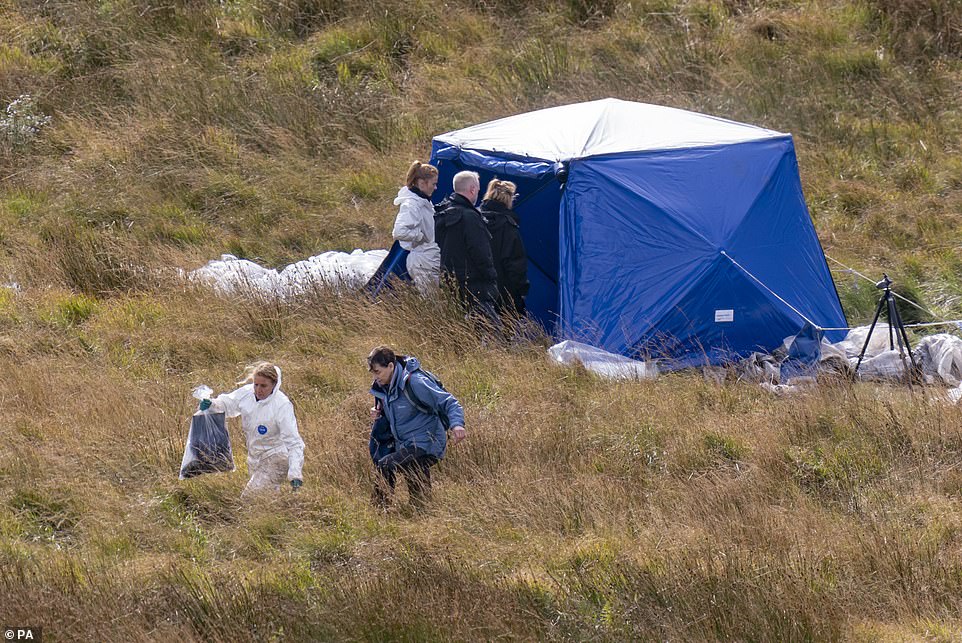 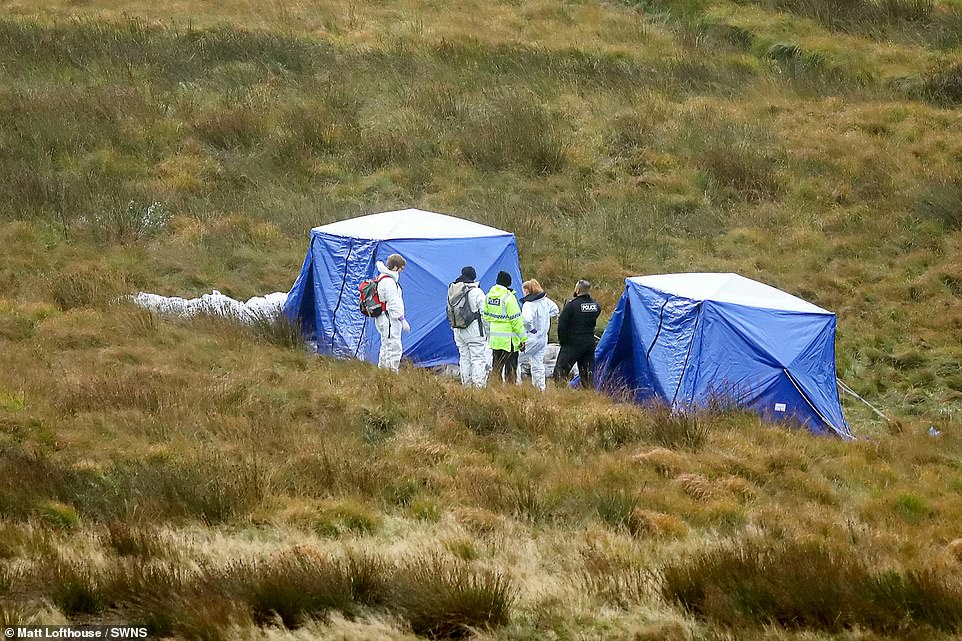 Police searching an area of moorland where the body of Ian Brady and Myra Hindley’s final missing victim could be buried say no human remains have been found. 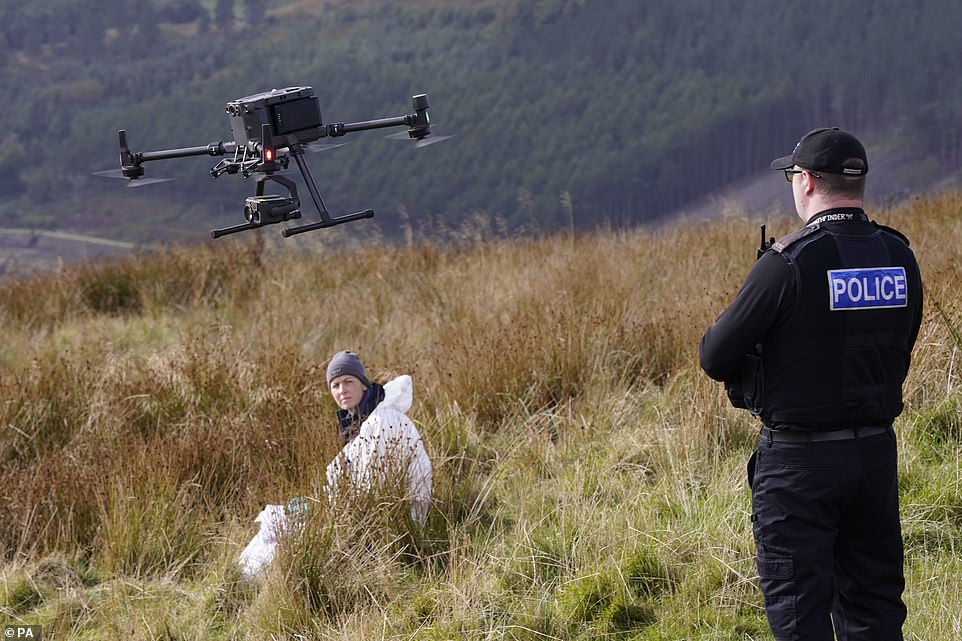 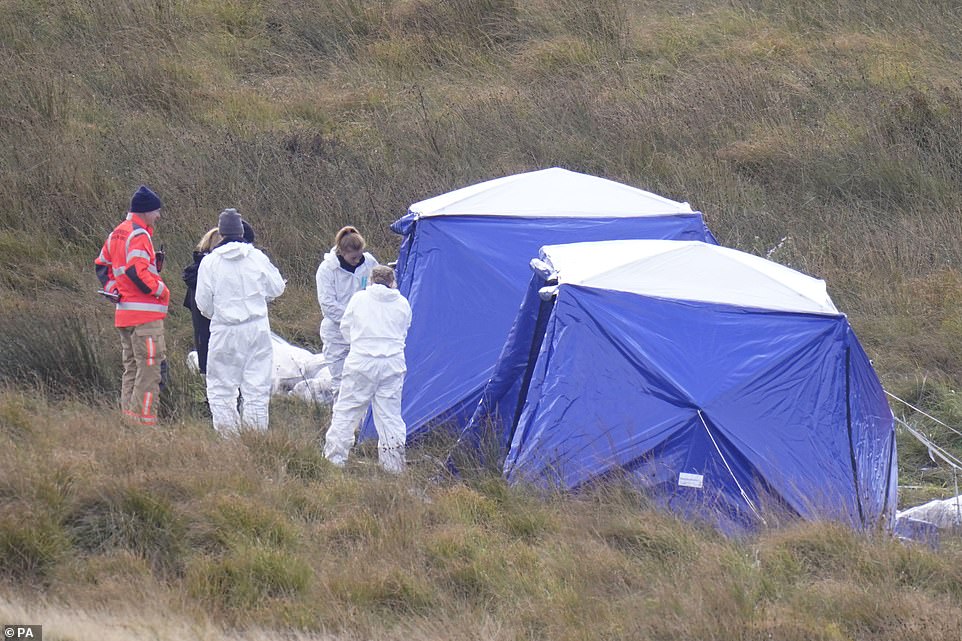 Two blue tents were still up today as police continued their search for the body of Keith. So far nothing has been found 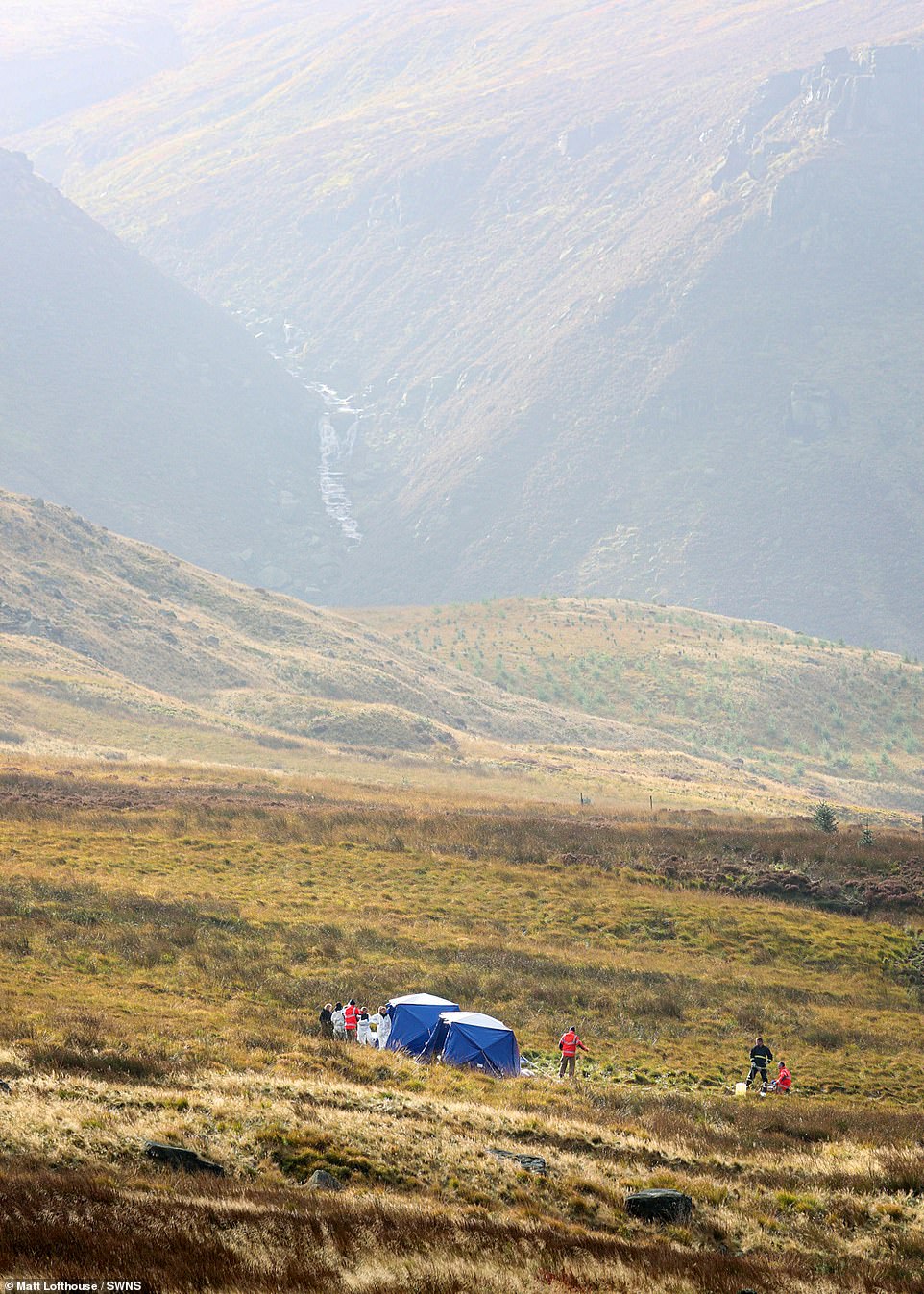 It was hoped their excavations would reveal the remains of Keith Bennett, a 12-year-old schoolboy murdered in 1964 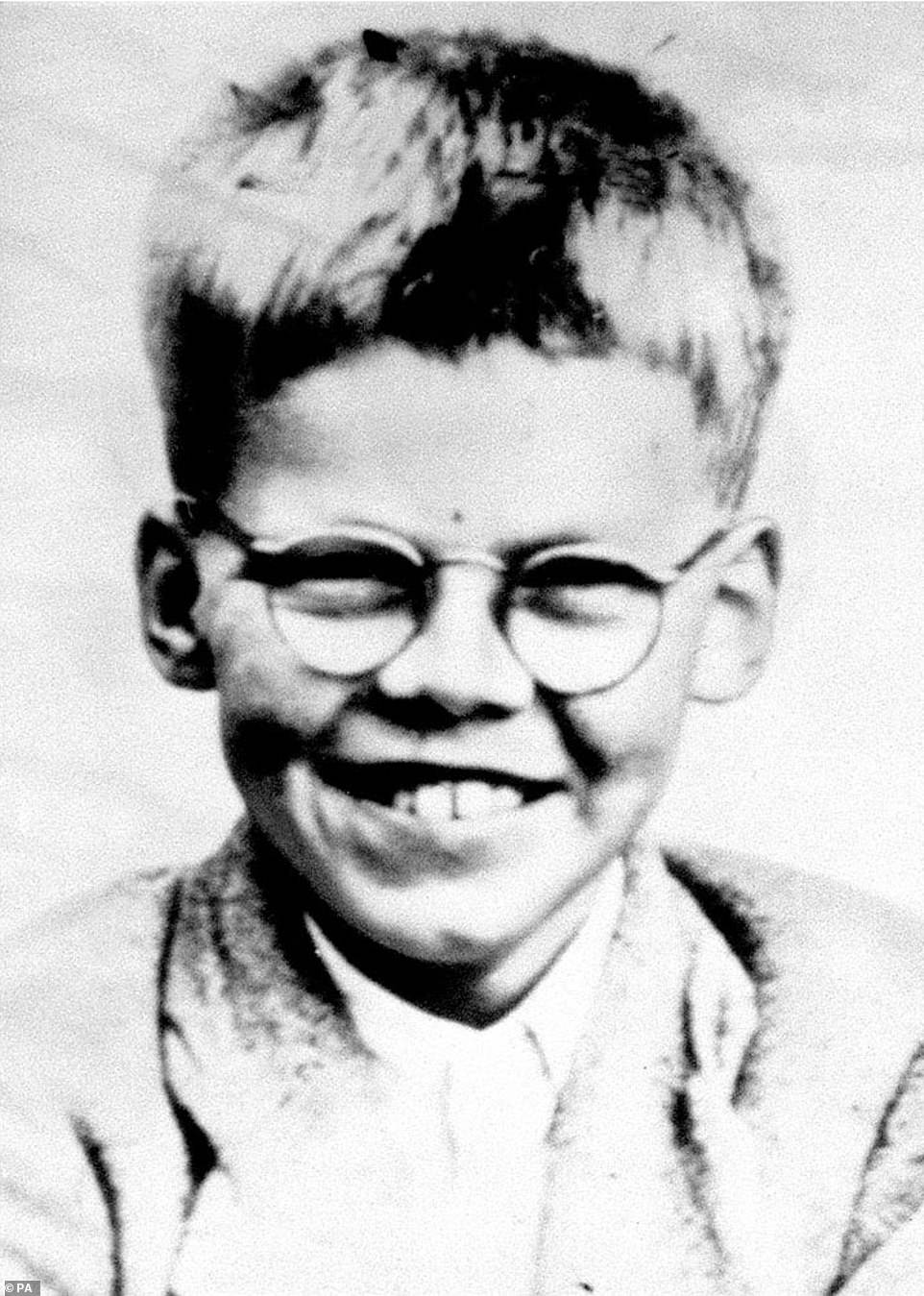 Keith Bennett was snatched by Ian Brady and Myra Hindley in 1964. He is their only victim who has never been found 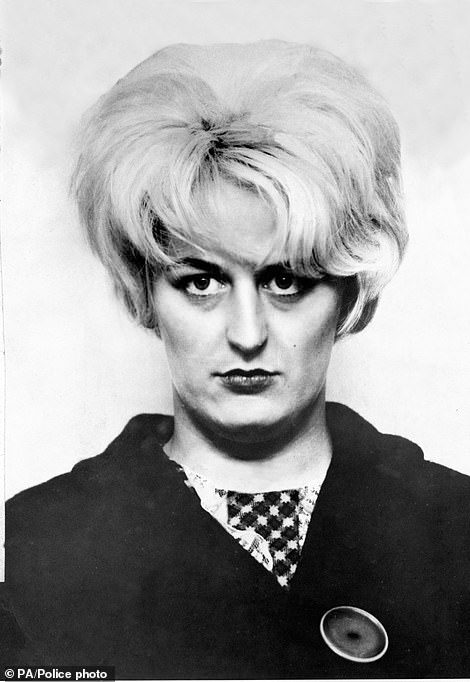 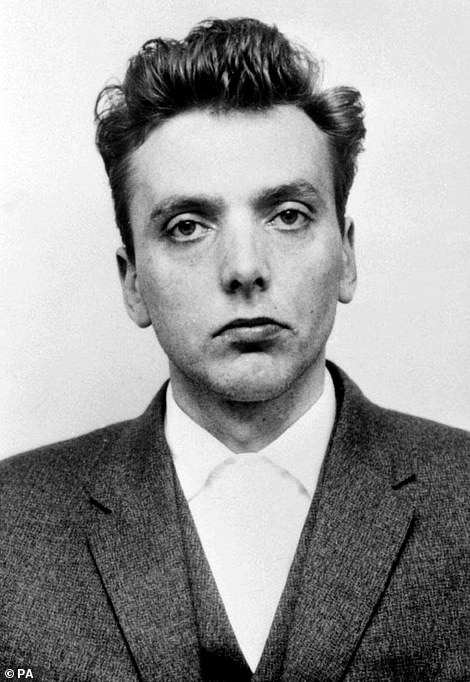 Between July 1963 and October 1965 Myra Hindley, left, and  Ian Brady, right murdered five children. Hindley died in 2002 and Brady in 2017 without revealing the location of Bennett’s body 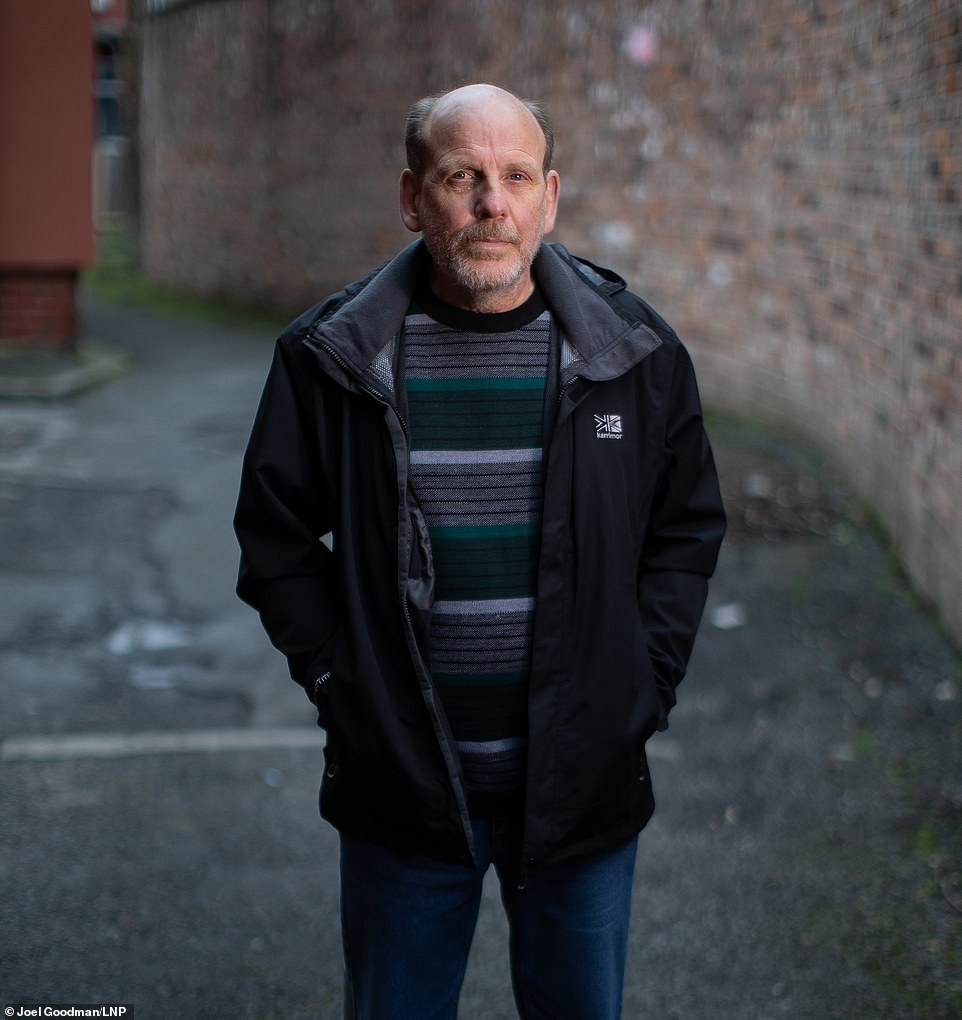 Keith, 12, was taken by Brady and Hindley after they pulled up in a van as he walked to his grandmother’s house in Manchester in 1964.

The evil pair tricked him into the vehicle before sexually assaulted, strangled and buried him in a shallow grave, which has never been found.

Senior Investigating Officer Cheryl Hughes said yesterday: ‘Following information received which indicated that potential human remains had been found on the Moors, specialist officers have resumed excavation of a site identified to us.

‘This information included photographs of the site and show what experts working with the informant have interpreted as a human jaw bone. No physical evidence of a jaw bone or skull has been examined. 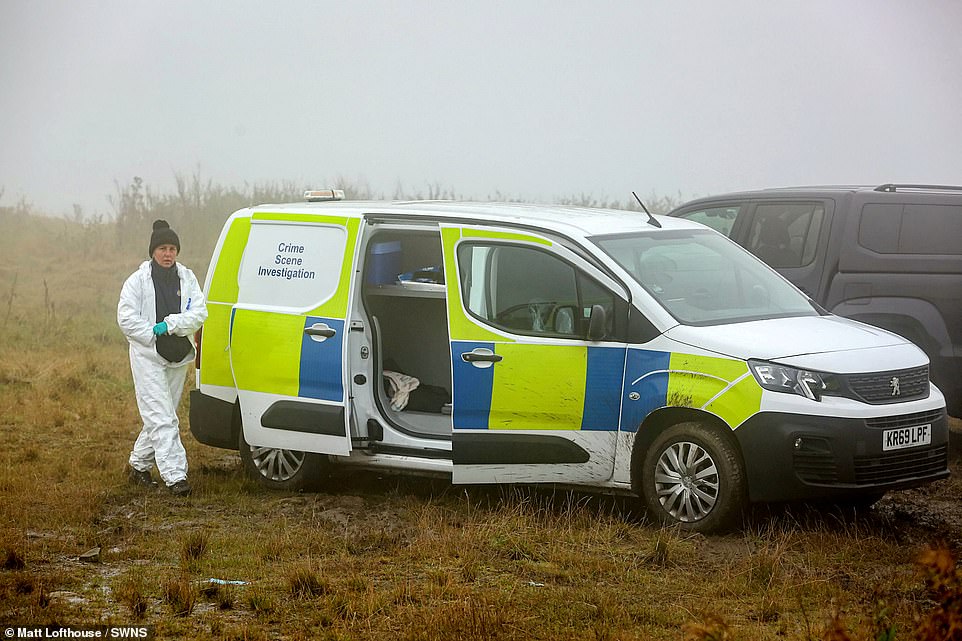 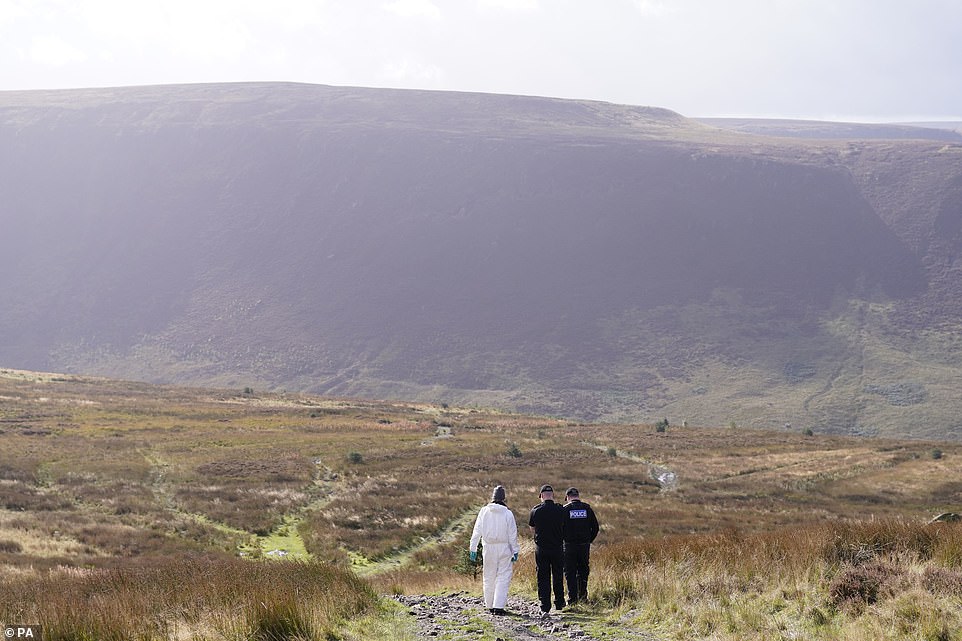 Police say parts of the search have been hampered by conditions on Saddleworth Moor, but were out in earnest again today 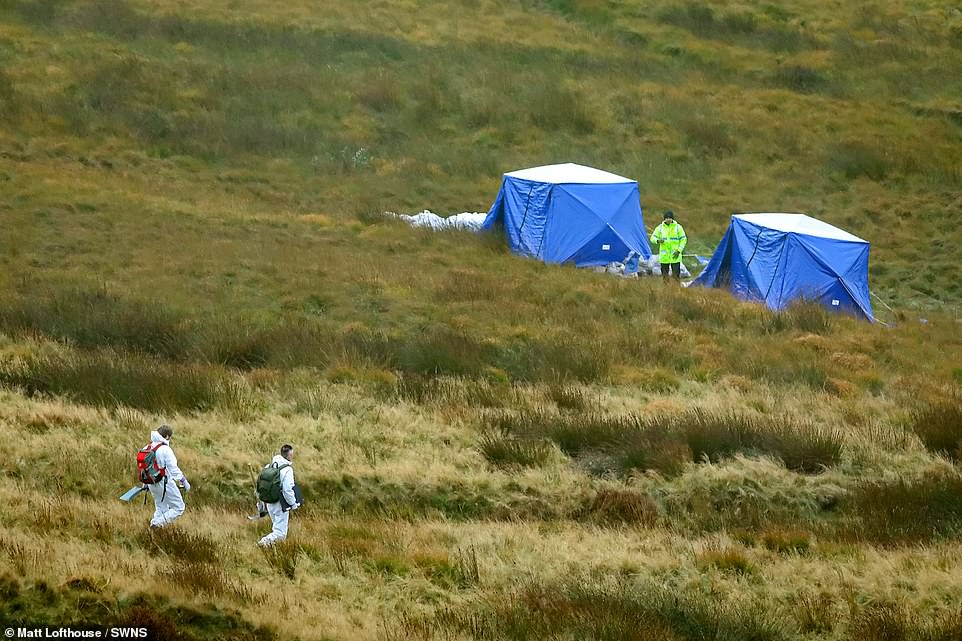 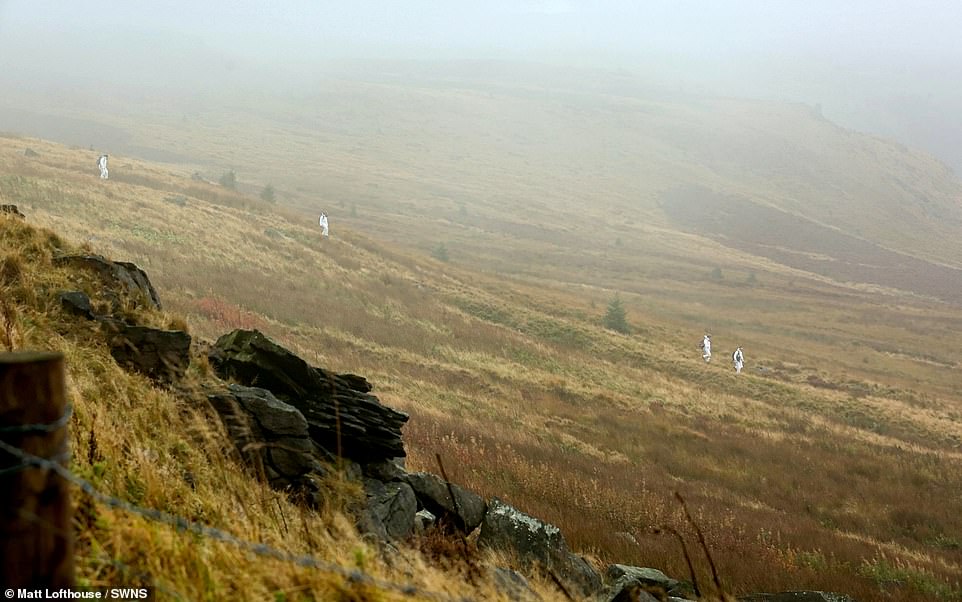 ‘However, based on the photographs and information provided, and in line with GMP’s usual practice to follow-up any suggestion of human burial, we began our search of the site of interest.

‘We have not found any identifiable human remains but our work to excavate the site is continuing.

‘Conditions are difficult and it may take us some time to fully complete the excavation but we are committed to ensuring this is undertaken in the most thorough way possible.’

Between July 1963 and October 1965, the Brady and Hindley killed five children aged between 10 and 17 in a two-year killing spree which shocked the nation. 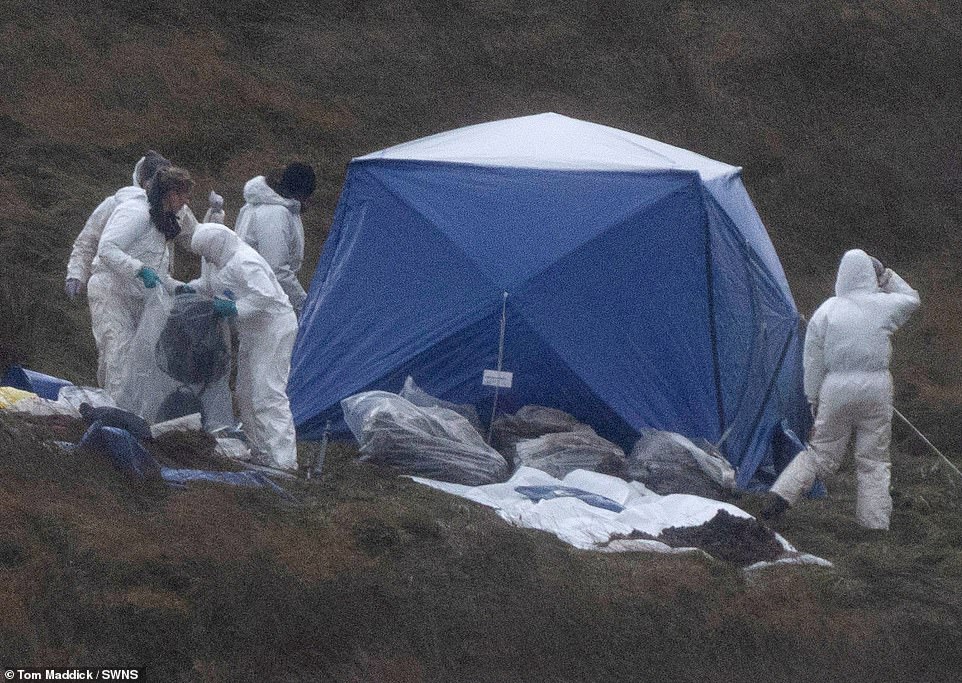 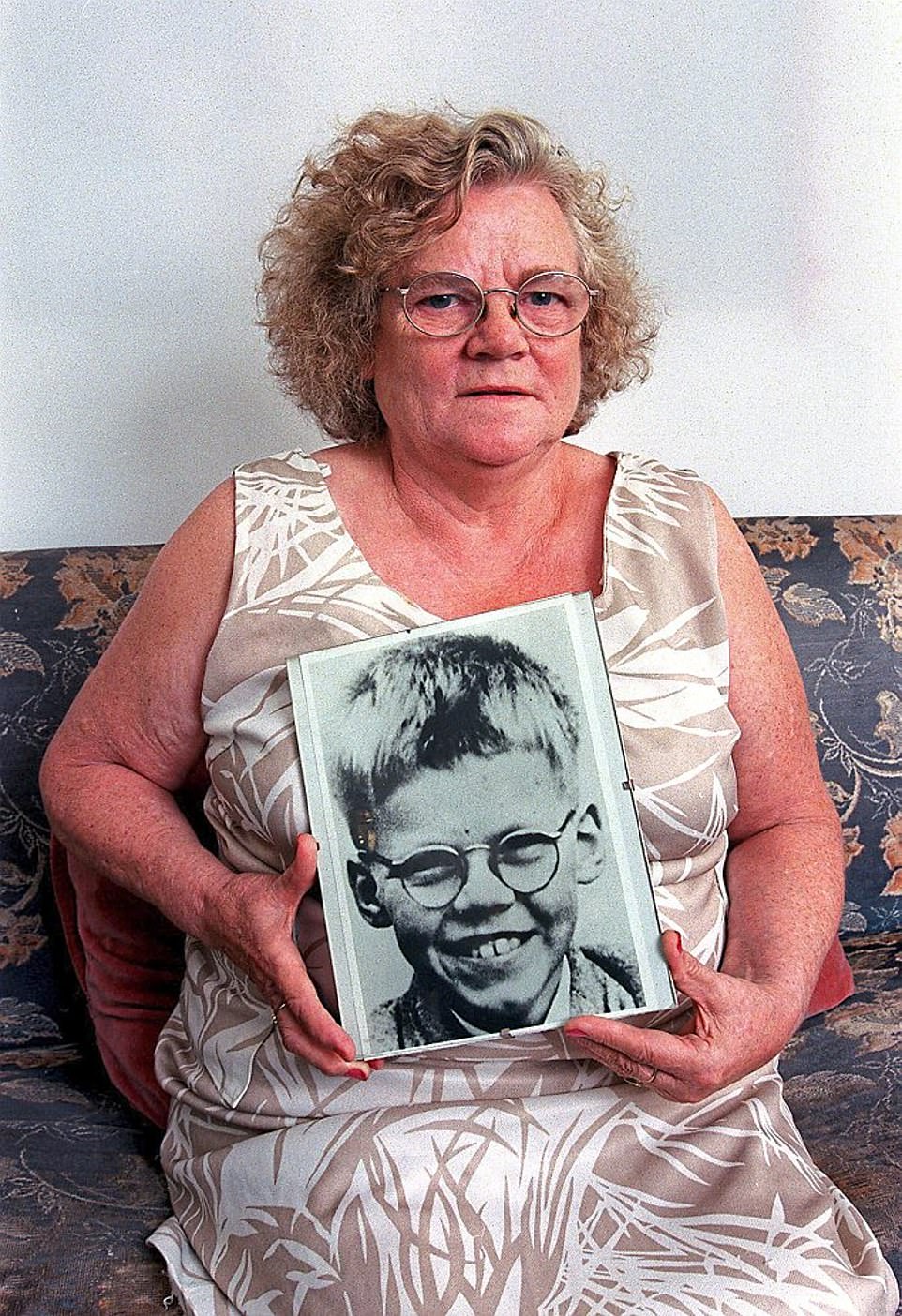 Haunted: Keith’s mum Winnie, who died in 2012 without ever knowing where her son was buried. Pictured with the famous ‘missing’ poster of her son

Ian Brady sent a letter to the brother of Moors murder victim Keith Bennett saying he would leave ‘special instructions’ of how to find the child’s remains in his will.

The taunt from the killer filled Keith’s family with hope, but they never received further clues from him.

In the letter sent to Keith’s brother, Alan Bennett, in 1991, Brady writes: ‘I again advise you to stop searching until matters are resolved. My will contains special instructions for you alone. My time is almost over.  Sincerely, Ian Brady.’

When the contents of the letter were revealed for the first time in 2019, Alan said: ‘It would be another 26 years after he sent that letter before he died. At the time we were hopeful that it might lead to Keith. I wrote to him several times and at one point asked if he would correspond with John Stalker (former assistant chief constable) after he left GMP, so that information could be passed that way. But Brady would change the subject, and nothing came of it.’

Alan feared it could have been a twisted game Brady was playing, but he also wondered if the ‘special instructions’ might be in two locked briefcases held by Brady’s solicitor.

Alan believes they could contain clues as to the exact spot that Brady and Myra Hindley buried Keith, after abducting and killing him in 1964.

But Brady’s solicitor Robin Makin refused to give the cases to Cold Case Unit officers from GMP.

Just before his death in May 2017, Brady requested the two combination-locked cases be put in secure storage.

It has since emerged officers went to court for a search warrant to open the cases to check them for clues.

But a district judge refused the application, stating there was no prospect of an investigation leading to a prosecution as both killers were dead.

Keith’s brother, Alan, 62, said in 2019: ‘There is a desperate need to look for anything that may help in the recovery of Keith’s body and there may be something in those cases. We cannot be sure be we need to know for sure – one way or another.

‘During my correspondence with Brady many years ago he stated that he had left instructions in his will for me alone. He did not give any further detail but it was at a time when I was searching on the moor and asking him about routes taken, areas of the moor, landmarks etc.

‘The refusal by Mr Makin to help any further is a great cause of distress considering that my brother’s body still remains on the moor while all the other victims have been returned to their loved ones for a proper burial.’

While two of the victims were discovered on the Moors in 1965, and a third in 1987, Keith was never found, with the location of his burial site taken to the grave following Hindley and Brady’s deaths in 2002 and 2017 respectively.

Nazi-obsessed Brady, who was officially diagnosed as a psychopath in 1985, taunted Keith’s brother Alan Bennett in a sickening letter in 1991.

Brady insister he would leave ‘special instructions’ of how to find the child’s remains in his will – but the clues never materialised.

Following this week’s findings of new remains, Alan took to social media last night to say that ‘all should be clear and final by some time tomorrow.’

However he expressed his scepticism, writing on Facebook: ‘Apart from believing this is the location for Keith and all the previous graves have been shallow why, if the police were taken to the location, has nothing been discovered as of yet?

‘I cannot escape the feeling that we have been here before.’

Forensics were pictured erecting two blue tents on Saturday as they resumed digging in a bid to end the six-decade mystery of little Keith’s final resting place.

Firefighters were also called to the scene to pump the digging site, which has become waterlogged due to the rainy weather.

It comes after the Daily Mail exclusively revealed this week that detectives were preparing to exhume a particular area where suspected skeletal remains had been found.

It included what experts believed were to be a child’s upper jaw with a full set of teeth.

Forensic anthropologists from Greater Manchester Police were examining potential samples of body tissue taken from the area in the hope of extracting DNA which could finally crack the infamous murder case.

Detectives were also looking at a small sample of material thought to be clothing found buried 3ft underground beside the skull.

Keith’s brother Alan, 66, was said to be ‘stoic’ when news about the unexpected twist in the case broke on Thursday.

His solicitor John Ainley said on Friday: ‘I have spoken to my client, Alan Bennett, concerning the reported development in the search for his brother Keith Bennett.

‘My client is keeping an open mind on the latest report having regard to earlier such reports that have raised expectations but not resulted in finding Keith’s body.

‘Naturally, the family are hoping that Keith has been found after all these years and their tireless efforts to find closure.

‘I understand Greater Manchester Police are investigating a site of interest but that it will take some weeks to establish whether there is a connection with Keith.’

The development came after author Russell Edwards assembled a team of experts in a bid to solve one of the greatest murder mysteries of all time.

U.S. and Turkish officials discussed Ukraine and NATO in an unannounced meeting