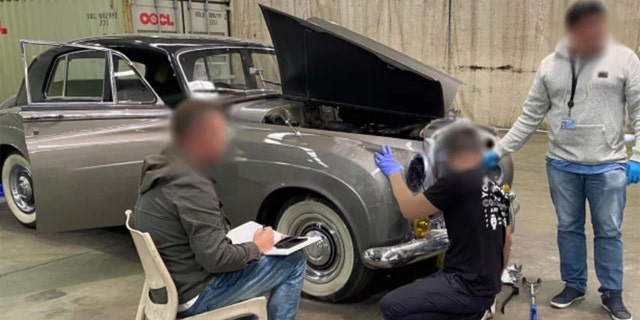 The most expensive vintage Bentley ever sold was a rare 1932 4.5-liter supercharged “Blower” Bentley that sold for $7 million at an auction in England in 2012.

One has now been found in Australia that costs 20 times more than that – but only for what’s in it.

Police in New South Wales were informed that a 1960 Bentley S2 was being shipped from Canada that they wanted to check.

After arriving in Port Botany on Thursday, authorities executed a warrant at the house where it was being stored, seized it and X-rayed it.

The police got information about the shipment.
(NSW Police Force)

After detecting some anomalies in the scans, they removed the headlights and found bags of methamphetamine in the back, before breaking into the vehicle.

Some of the methamphetamine was hidden behind headlights.
(NSW Police Force)

Two men, aged 22 and 23, were detained and charged with multiple drug trafficking offences.

Further investigation led to two additional related arrests and the seizure of five pounds of meth and $750,000 in cash.

Details of the vehicle and its ownership history have not been released, but according to the Haggerty Collector Car Appraisal Guide, a typical S2 in top condition costs around $75,000, while custom coachbuilt models can go for $350,000.

Gary Gastelu is the automotive editor for Fox News Digital.