This ship tried to warn the Titanic about the iceberg. Now scientists have found its remains 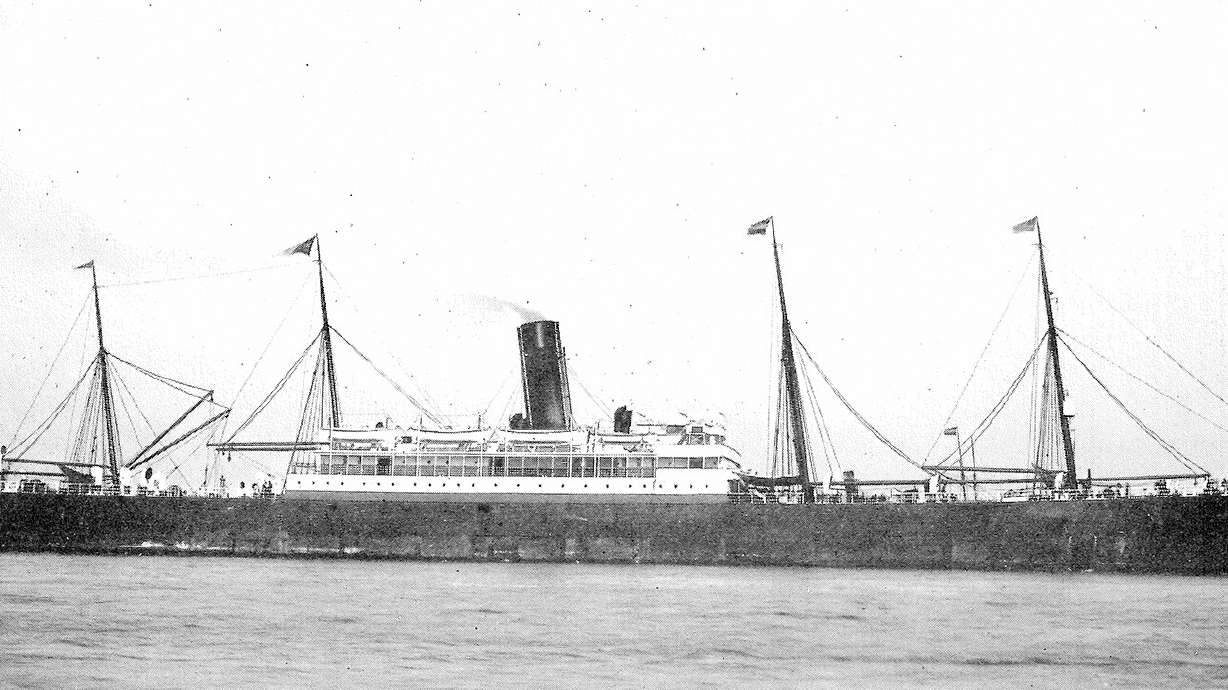 The wreckage of the SS Mesaba, which tried to warn the RMS Titanic of the sunken iceberg on its maiden voyage, has been found at the bottom of the Irish Sea. In 1918 the ship was torpedoed while in the fleet. (State Library of Queensland)

UNITED KINGDOM – The wreckage of the ship that tried to warn the RMS Titanic of a sunken iceberg on its maiden voyage has been found at the bottom of the Irish Sea.

On April 15, 1912, the British merchant steamship SS Mesaba sent a radio message to the Titanic while crossing the Atlantic. The message was received by the Titanic – which had been advertised as undeliverable – but did not reach the ship’s main control centre.

Later that night, the Titanic hit an iceberg and sank. More than 1,500 people died in the world’s most infamous shipwreck.

The Mesaba continued as a merchant ship until she was torpedoed by a German submarine while in convoy in 1918. Twenty people died, including the ship’s commander.

Its exact location was unknown for more than a century, but scientists have now found the remains of Mesaba using multibeam sonar. The offshore survey instrument uses sound waves to enable seabed mapping to reveal superstructure on sonar images in such detail, allowing researchers from Bangor University and Bournemouth University in the United Kingdom to positively identify the shipwreck in the Irish Sea.

According to a news statement, this was the first time researchers had located and positively identified the wreckage.

‘pieces of the jigsaw’

Michael Roberts, a marine geologist at Bangor University in Wales, led the sonar survey at the university’s School of Ocean Sciences.

He has been working with the marine renewable energy sector for many years to study the impact of the ocean on energy generating infrastructure. Shipwrecks proved to be a valuable source of information in this area.

“We knew there were a lot of shipwrecks in our backyard, in the Irish Sea,” Roberts told CNN on Wednesday, adding that they “could provide useful insight into what happens when things go to the seabed.”

But it was only when Roberts began working with Ines McCartney, a marine archaeologist and research associate at Bangor University, that the “pieces of the jigsaw” began to fit together.

“McCartney was really interested in using that technology to identify shipwrecks,” Roberts said. A team of researchers began to delve deeper into the unsolved mysteries to “tease their stories”.

“Previously we were able to visit a few sites a year to visually identify wrecks. The unique sonar capabilities of (the purpose-built research vessel) Prince Madog have allowed us to develop a relatively low-cost means of monitoring the wreck. Connect this back to historical information without expensive physical interaction with each site, McCartney added in the release.

Roberts said the cost of finding and identifying each wreck was between $855 and $1,070.

A ‘game-changer’ for marine archaeology.

In total, Prince Madog discovered 273 shipwrecks spread across 7,500 square miles of the Irish Sea – an area roughly the size of Slovenia.

The vessel was scanned and cross-referenced against the UK Hydrographic Office’s wreck database and other sources.

Many of the newly identified wrecks, including Mesaba, were previously misidentified, the researchers said.

McCartney described the multibeam sonar technique as “a ‘game-changer’ for marine archaeology”, allowing historians to use the data it provides to fill gaps in their understanding.

Prince Madog was commissioned by Bangor University and is managed and operated by offshore services provider OS Energy. “It really allows us to go out for up to 10 days at a time and go dot-to-dot between ships,” Roberts said. “We were doing 15, 20, 25 demolitions a day. This is the ship that underlines everything.”

The technology used by the ship has the potential to be as effective for marine archaeologists as the use of aerial photography by archaeologists on land, the release said.

“A lot of these falls are in deep water. There’s no light down there, so you can’t see much,” Roberts said. “If a diver went down and swam the length of the wreck – they would never get the images we get because of the scale of these things. There’s so much sediment here that you can’t see everything.”

“So this is a way to really effectively visualize using sound to see something you can’t see with the naked eye — like an ultrasound during pregnancy.”

While the technology has the potential to uncover the stories of all these lost ships, Roberts added, “researchers have also examined these wreck sites to better understand how objects on the seafloor interact with physical and biological processes, which can help scientists.” Development and Growth.”

Details of all the wrecks are published in McCartney’s new book, “Echoes from the Deep.”

The most recent news

More stories that may interest you