Visiting the US, Gantz emphasized Israel-US cooperation in the face of ‘Iranian aggression’. 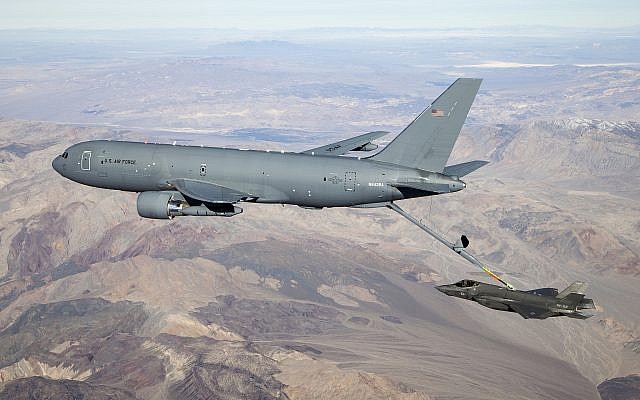 Defense Secretary Benny Gantz said Thursday during a visit to the headquarters of the US Central Command at MacDill Air Force Base in Tampa, Florida that Iran and the US will continue to increase cooperation in countering Iranian aggression.

Gantz made his remarks while touring the base’s air refueling wing with U.S. Central Command chief Gen. Michael Kurilla. This was the first visit of an Israeli defense minister to the CENTCOM headquarters.

According to a statement issued by the Defense Ministry, Gantz and Kurilla discussed joint exercises and increased cooperation on land, sea and air, as well as in cyber security and intelligence.

“I want to thank General Kurilla for having me,” Gantz said. “Israel’s cooperation with CENTCOM and regional countries is a game changer in our ability to maintain security, stability and peace in the Middle East, especially in the face of Iran and its proxies,” he added.

He added that he intends to deliver the message during a scheduled meeting with National Security Adviser Jake Sullivan in Washington on Friday.

As part of my visit to CENTCOM yesterday, I also toured the central HML, which coordinates world operational operations, and the refueling squadron. I would like to thank General Corilla for his hospitality. CENTCOM’s cooperation is transformative in its ability to maintain security, stability and peace in the Middle East. pic.twitter.com/NDrNaXFjWH

In December, Israel asked the US to speed up the delivery of purchased refueling planes to be used to attack Iranian nuclear sites – but the Biden administration said the first plane would not be delivered until 2024.

The State Department approved the sale of eight new KC-46 Pegasus aerial refueling tankers to Israel in March last year. It is unclear whether Gantz’s visit to CENTCOM’s air refueling wing was related to the pending contract.

Citing American and Israeli officials, The New York Times reported at the time that Gantz made the request during a meeting with his US counterpart Lloyd Austin in Washington.

The report noted that the tankers would be a significant upgrade for Israel, and that without them, Jerusalem would have to rely on its aging fleet of refueling planes for strikes on Iran or pit stops in Saudi Arabia or the United Arab Emirates. None of them wants to be linked to an attack on rival Iran.

Current and former officials are cited in the report as saying that Israeli military planners believe that any attack on Iran would likely require multiple strikes against the underground Fordow uranium enrichment facility, some of the sites that require rapid refueling.

Gantz is visiting the US in the same week as a trip by Israeli National Security Adviser Eyal Hulata, both carrying messages of displeasure from Jerusalem at the pace of talks to revive the 2015 nuclear deal with Iran.

Iran said on Wednesday it had received a US response to a proposal to return to the so-called Joint Comprehensive Plan of Action, scrapped by then-US President Donald Trump in 2018.

Prime Minister Yair Lapid told reporters on Thursday that Israel’s efforts to influence the outcome of the negotiations had paid off, but that the deal was still a “bad deal” for Israel.

According to a Channel 12 report Thursday, the emerging deal would not require the U.S. to remove Iran’s Revolutionary Guard Corps from its list of foreign terrorist organizations, nor would it waive Iran’s requirement to explain sites of suspected nuclear activity to the International Atomic Energy Agency. agency.

Before leaving for the U.S. on Thursday, Gantz tweeted that the goal of his trip was to “send a clear message regarding the nuclear deal negotiations between Iran and the powers that be: A deal that doesn’t roll back Iran’s capabilities for years and does. Don’t hold it back for years to come. which will harm global and regional security.

Supporting The Times of Israel is not a transaction for an online service, like subscribing to Netflix. The ToI community is for people like you who care A common good: Ensuring that balanced, responsible coverage of Israel is freely available to millions around the world.

Of course, we’ll remove all ads from your page and you’ll unlock access to some great community-only content. But your support gives you something even more profound: the pride of being involved Something that really matters.

Join the Times of Israel community Join our community Already a member? Sign in to stop viewing this