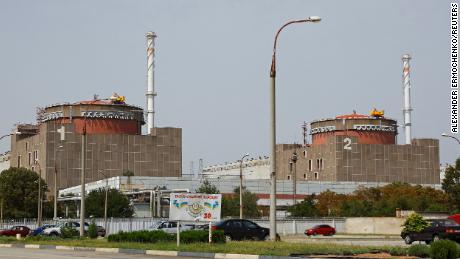 Energoatom’s statement said that at 2.04pm local time on Friday “one of the power units that was stopped yesterday was connected to the power grid and capacity is being added.”

It called Zaporizhia’s nuclear workers “real heroes” who “tirelessly and firmly hold the nuclear and radiation safety of Ukraine and the whole of Europe on their shoulders and work selflessly so that their native country has life-giving electricity.”

The last remaining power line powering the station was disconnected twice on Thursday due to a fire at a nearby thermal power plant, according to the nuclear operator at the time. Three other lines of plant “were previously lost during the conflict,” it added.

Power was restored later Thursday, but the Zaporizhia nuclear power plant remained disconnected from the country’s power grid until Friday. The two reactors that remain in operation at the plant require a power source to operate and feed electricity into the grid.

Russia has been in possession of Europe’s largest nuclear power plant since March. Clashes around the complex have created widespread anxiety and fears of disaster.

Kiev has repeatedly accused the Russian military of stockpiling heavy weapons at the complex and using it as cover to launch attacks, knowing that Ukraine cannot return fire without hitting one of the plant’s six reactors.

Meanwhile, Moscow has claimed that Ukrainian forces have targeted the site. Both sides have tried to point fingers at each other for the threat of nuclear terrorism.

On Thursday, Ukrainian President Volodymyr Zelensky said backup diesel generators had been “immediately activated” at the plant to prevent a “radiation catastrophe”.

“The world must understand what a danger this is: if the diesel generator had not been turned on, if automation and our employees of the plant had not reacted after the blackout, we would have been forced to overcome the consequences of the radiation accident,” Zelensky said in a night speech.

Generators are installed to supply power to the coolant pumps to stop the fuel from overheating in the event of a power outage.

“Russia has put Ukraine and all Europeans one step away from a radiation disaster,” Zelensky said, adding that officials from the IAEA, the UN’s nuclear watchdog, should be given immediate access to the site.

An administrative worker at the plant told CNN on Friday that “the situation looks like the end of the world at times” amid “shootings around the station and the city, the smoke from the fires, the dust from the thermal power plant’s ash heap.”

“It’s really difficult when there are strong winds,” added the worker, who spoke to CNN on a previous occasion and whose identity is not being released for his safety.

The Zaporizhia nuclear power plant generates about 20% of Ukraine’s electricity, and a prolonged disconnection from the national grid would have been a major challenge for Ukraine as cold weather approaches.